As a long-time volunteer for the Brooks Bandits, Sharon Opkins brings a mix of generosity and competitive spirit to Saturday practices.

Since the beginning of the Brooks Adaptive Sports Program in 2007, Sharon has donated her time and energy on and off the courts. She volunteers at weekly quad rugby practices, special events, and annual tournaments. Volunteers are a pivotal part of running the Program, and when they are needed, Sharon is one of the first to step up and offer to help. You will often find Sharon, her husband Bob and their teenage son, Richard volunteering at most special events, including horseback, surfing, power soccer, basketball, and rugby.

“Lives are enhanced by this Program,” she explained. “How could I not help?”

When she first began volunteering, Sharon knew very little about quad rugby. That didn’t stop her from jumping right in.

“I was drawn to the positive attitudes of the players and quickly fell in love with the game,” she said, about the full-contact sport. “I saw how competition increased the players’ confidence, on and off the court.”

Sharon is no stranger to tough competition.

The former US National Long Course and Short Course Triathlon team member knows a thing or two about beating the odds by bringing determination and hard work to the starting line.

Sharon competed in her first triathlon at the age of 40 and came in fourth in her age group. Running a triathlon was a goal she had set for herself. Not only did she reach her goal, she far exceeded it. She was selected to race for the US National Triathlon Team and competed for three years. She has since endured numerous shoulder surgeries, but continues to stay active by swimming or biking any chance she gets.

She recently earned a bachelor’s degree in Exercise Science and gives back to her community by volunteering with the Brooks Bandits, helping out with set up, snacks and drills. She has also taken on a leadership role by working with the student volunteers to get them more involved with the Program, explaining the rules of quad rugby, how classifications work, and introducing them to the team members.

“Every tournament is like a family reunion. You get the opportunity to catch up with the families, other teams, and the refs,” she explained. Although she doesn’t have any family members on the team, she considers the players an extension of her family. “Rugby is my baby,” she said with a genuine smile. “This team is made up of such a great group of guys. It’s like one big family.”

When asked about Sharon’s involvement with the Bandits, Program Manager Alice Krauss beamed with praise for her efforts. “Sharon has been such a great help. She works so hard for the Program and it’s appreciated beyond measure,” Alice said. 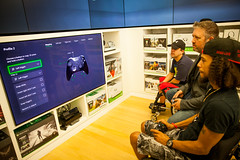 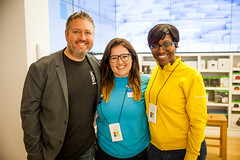 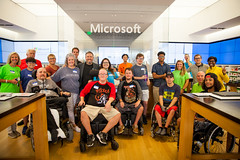 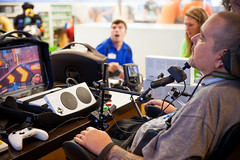